Moving from Yes to No on Scottish Independence

In 2014, I voted for Scottish independence but, like many fellow Scots, I periodically revisit the reasons I lent my support to Yes and reassess if it is necessary to change course. I was not a bloody-minded, independence at any cost-type, cybernat. I was only just over the line on independence but could see multiple benefits in the union. Having never really given independence much thought before, I was persuaded to back it but I often ask myself – what would it take for me to move from Yes to No?

State of the Union

It is clear the union is under threat. In January, the Sunday Times laid bare the state of the union under the headline: ‘Our Disunited Kingdom’. It contained the twentieth consecutive poll placing Scottish independence in the lead by a margin of 52 to 48%, revealing 50% of voters in Scotland and 51% in Northern Ireland would welcome a referendum within five years, showing growing support for Welsh independence and stating voters in all UK nations thought Scotland would be independent in 10 years.

In a podcast one year before his untimely passing, the late Conservative thinker Roger Scruton said: “Brexit was a cry from the depths.” His evidence being many votes to leave the European Union came from deprived communities. This is true for several fishing communities even in Scotland which voted by majority to leave in 2016 but I believe the same applies to independence when the four local authorities to vote for it by majority in 2014 were four out of the five most deprived in Scotland.

The Journey Towards Independence

Initial support for Scottish independence was relatively low because many like me had never given the notion much consideration. Had a pollster ever asked me on which side I fell, I might well have said No but that was simply my default position. I remember the evening, my Damascus Road moment if you will, when I switched sides. It was in the first few months of 2014 when I attended a ‘No Thanks’ event in the Bonar Hall in Dundee. The event, organised by the Scottish Labour Party, was absolutely packed.

Former Prime Minister Gordon Brown was the main speaker. He was in charismatic, coherent and compelling form in his defence of the union. He spoke passionately and persuasively about Scottish, English, Irish and Welsh soldiers fighting fascism in the Second World War, followed by a wonderful period of job creation and housing boom as well as the pioneering of national health and social security provision but I was left feeling cold. Were our greatest inventions, successes and victories behind us?

These were indeed moments of national progress, often introduced by progressive and visionary Labour governments, but they were no longer leading in Holyrood nor Westminster and were incapable of stemming the tide of devastating policies like the Welfare Reform Act 2012, voted for by only a fifth of Scotland’s elected members.

The Pursuit of Solidarity

One of the stumbling blocks to my conversion was the notion of social solidarity. I felt a fondness for my compatriots throughout the United Kingdom and could not differentiate between binmen in Dundee or Durham. However, having spent my life unravelling the effects of UK Government policy alongside people experiencing poverty, I felt as if preserving a system that entrenched and exacerbated the misery I sought to alleviate was to undermine very solidarity I was actively building.

We still see this juxtaposition. In advance of the UK Chancellor’s Budget, his party strained over whether or not to make permanent the £20 per week uplift offered to Universal Credit claimants in March 2020, which it extended only until September 2021. Meanwhile in Scotland, elected members welcomed the new Scottish Child Payment, which could assist 443,000 children and lift around 30,000 out of relative poverty. We have two governments taking two divergent approaches to poverty.

As the referendum neared, The Guardian columnist George Monbiot became an ointment in an arena of opponents and articulated ideas I had struggled to execute by suggesting Scottish independence was less about Scotland cutting off its neighbours and more about insulating its citizens from policies its elected members voted against.

Various challenges bedevil the Scottish independence proposition. There are still no coherent answers on currency or the economy, momentum for independence is driven more by disdain towards Boris Johnson than a compelling vision for an independent Scotland and, after 22 polls showing consistent growth in support for Scottish independence, Survation published a poll with a marginal lead for the union ahead of the former and current First Ministers’ evidence sessions on sexual harassment allegations.

However, various challenges also bedevil the unionist proposition. The ascent of independence lies upon a void left by the absence of a robust counter-narrative. Katy Balls, in an article for The Spectator entitled ‘Can the Union be Saved?’, wrote: “A focused campaign could deny Sturgeon a majority in May.” The stated focus for unionists should be to stay low and say little because the SNP are doing a fine job of eviscerating their own electoral fortunes without any need for additional help.

A Compelling Vision for Scotland

First and foremost, I am a democrat. I lost in 2014 and respected that a majority of my fellow natives were not persuaded by the prospectus. That said, unless there is a large-scale, radical and sweeping change which enables Scotland to take a different policy trajectory from the United Kingdom then the ascent of independence will not abate. The most recent poll by Ipsos Mori shows how tight the margin is but it is incumbent upon both sides to construct a compelling vision for a future Scotland.

But are there circumstances in which I could see myself switching sides? Yes. 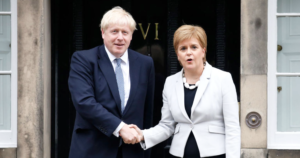