Solve the drugs crisis? Listen to the ‘Real Experts’

It is that time of year again. Today, the drug death statistics for Scotland will be released. The media will clamour for comment and politicians will line up responses to meet print deadlines. By contrast, those working in deprived communities to combat the consequences of substance misuse, families mourning the lives of loved ones lost on the altar of addiction or even those carrying scars while on the journey towards recovery, there will be another set of emotions altogether.

For many, this time of year is not one for pontification but for reflection. Late today, I, alongside others who work in this area, will take part in a memorial service on Buchanan Street organised by Glasgow-based charity, FAVOR UK. Many of those who plan to gather work at the coalface or are on their own path towards wholeness. There will inevitably be a sombre tone as we consider those whose lives have been squandered within a framework where adequate support is desperately limited.

In the latter half of 2019, following the news of 1,187 recorded lives lost to drugs in 2018, the Scottish Government finally buckled to public pressure and described the situation for what it was – a public health emergency. Since then, we have observed how quickly, and with laudable coordination, the Scottish Government can deploy its resources and support in response to a pandemic but voices from the frontline have drawn attention to another pandemic taking place for many years in Scotland.

The number of deaths rose again last year to 1,264 and, at the epicentre of the figures was my home city of Dundee, where Scotland’s then Minister for Public Health was based. Finally, drug deaths entered into mainstream public and political discourse. Growing up in Dundee, I was always aware of the presence of poverty and the reasons underpinning that poverty but our political leaders in 2019, rather than taking a period of sober reflection, started grasping for solutions and answers. 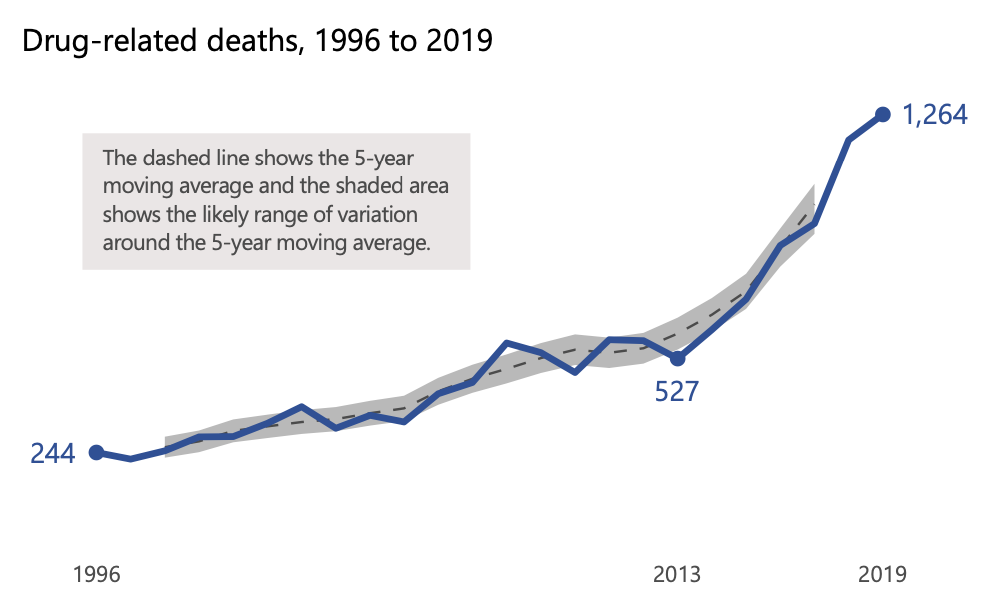 National Records of Scotland, Drug-related deaths in Scotland in 2019

Following the release of the figures last year, the Scottish Government pledged £20 million of funding to “help tackle the drugs emergency” in its Programme for Government but those resources were deployed to the very services Dundee Drugs Commission described a few months earlier as not fit for purpose. The Commission stated: “We learned about inadequacies in our local systems and services [and] frequently heard from individuals and families who feel the system has failed them.”

Decriminalisation may disempower illegal drug dealers but if the result empowers a kind of legal drug dealing run by pharmaceutical services, who have a vested financial interest in the ongoing prescription of substitute drugs, then we are no further forward. Furthermore, many still on the journey of recovery tell me they have concerns about using a safe injection room. One friend said: “Who do you know that buys a half bottle and drinks it in front of the owner of the off licence?”

Credit where credit is due, the Scottish Conservatives have engaged the voluntary sector and published its Right to Recovery Bill. The principles state any individual seeking addiction or substance misuse treatment should be able to quickly access it, and not be refused, unless a medical professional deems it would be harmful to the individual. If they do, the specified professional will be required to provide a written explanation detailing the grounds of refusal within 24 hours.

If I had a pound for every time I heard plans for a bill about enhancing people’s rights in Scotland, I would be able to comfortably retire. Currently, there are plans for a right to food, a right to assisted death and now a right to recovery that creates more statutory levers. I am not convinced arming the state with more power to implement rights in a year which has seen some of the most authoritarian legislation in peacetime is a credible approach but, nevertheless, it is a welcome contribution.

Like many young people growing up in Dundee, I have had a turbulent relationship with class A drugs. Two years ago, I was sitting in a room with Leslie Evans, the Permanent Secretary to the Scottish Government, who engaged with individuals and organisations in Dundee. I raised my concern about the Government-convened Drug Death Task Force which, at the time, had an absence of people with experience of addiction situated on it. Evans said she shared – and raised – similar concerns.

We need to utilise both lived and learned experience but the lack of interaction with those experiencing addiction, on the journey of recovery or having overcome addiction is fundamental to our current failure. How can we administer an antidote to address an ailment we have not fully understood? In Dundee, the two major links to addiction I have consistently observed over the last 15 years are adverse childhood experiences and lack of purpose. My affliction was acquainted with the latter.

Between Addiction and Abuse

The link between abuse and addiction in Dundee, however, is deeper. I remember my first encounter with Narcotics Anonymous in the Hilltown in Dundee and it was not only my first meeting but also Caroline’s. She was a glamorous, middle-class redhead in her late-twenties and married with a six-year-old daughter. However, she had been raped by a paedophile aged only four and, unable to shake flashbacks, she self-medicated via the use of heroin at the age of 26.

Her husband did not know how to help Caroline but when she failed to pick up her daughter from school or was under the influence when she did and teachers alerted the Social Work Department, he became seriously concerned. Unable to cope with the enormity of her spiralling addiction and concerned for his daughter, he threw Caroline out. She came to the foodbank I was running months later and told me she was prostituting herself five times a night. A year later, she was dead. Overdose.

From Margins to Mainstream

Following the Second World War, investments made by the World Bank to promote poverty reduction and stimulate economic growth yielded successful results in developed nations but less successful results in developing nations. To understand why, the World Bank decided in 1990 to engage in a decade-long piece of research to consult people experiencing poverty, whom they later described as “the real experts”. The result, 10 years later, was one of the most ground-breaking reports on poverty.

The Scottish Government already has a precedent for these types of approach, as evidenced by Social Security Scotland and The Promise Scotland. Both organisations gleaned input from those with experience of social security and the care system to develop policy. People who have entered, experienced and exited addiction are equally crucial to policy around treatment for substance misuse but, even now, these voices are situated on the margins rather than being brought into the mainstream.